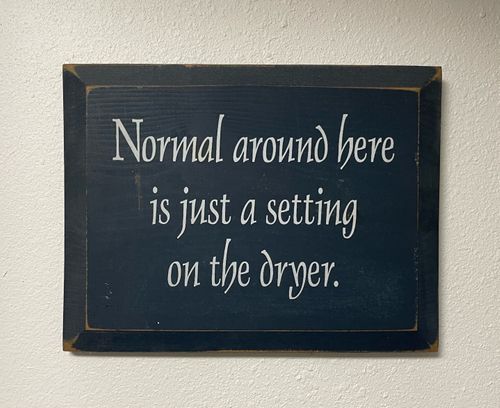 Normal Is Just A Setting on the Dryer

Thinking I would be reassuring to veterans, I started telling them about this sign over my dryer several years ago. I am so aware of the stigma about the crazy vet or the angry vet. According to a recent survey by Cohen Veteran’s Network, the general public believes that over half of our veterans have post traumatic stress symptoms. Not surprisingly, the angry, trauma-affected vet is considered the norm. We have to end this stigma.

Conversation with a Veteran:

I told them about my sign because I wanted to let them know that I would not be judging them. Apparently, what they heard the loudest was “normal” and “dryer”. Here’s what a lot of them said:

Vet: You want to know what normal is? Going on a training mission for 30 days in the desert. Carrying a 70 pound rucksack. Wearing the same clothes every day. No showers.

Vet: When you go outside the wire, you don’t shower until you come back. It gets pretty bad, and that first shower feels pretty good.

They left me laughing about how easy it was to get used to being dirty all the time. A lot of them loved getting and staying dirty. It meant they were working hard. Of course, there were also vets who thought it was the grossest part of being in the military. Who’s to judge?

Vets are wired differently. They are the kind of person who doesn’t mind getting filthy, and they don’t want to talk about their feelings. Anyone who is wired to run toward danger is like that. Male and female. That person is going to focus on the mission, and will not take much time, if any, to figure how the mission will make them feel. After the mission is over, they debrief about what they could have done better, but not how it made them feel. When those situations involve the stuff that causes PTSD, complications arise when vivid memories replay. A web of grief, regret, guilt, shock, horror, fear takes up residence. Talking about these complex feelings doesn’t fit in any debrief manual, and so they are not generally equipped to talk about how what happened made them feel. Feelings don’t matter. It’s the mission that matters. But when complex feelings just beneath the surface interfere with future missions, or with personal things, it can be a mess to sort out.

Conversation with a Veteran:

Dr. Pam: Do you talk about the war?

Vet: Only to my buddies. We don’t really talk about the bad stuff. We don’t have to. We know what happened. We don’t want to feel like crap. Unless we’re drunk. Then we’re crying and shit. But not typically.

Dr. Pam: Have you told your spouse about what happened?

And so, not talking about the emotions of war, or the mission, has been the norm. On the one hand, vets aren’t wired to talk about their feelings, and on the other hand, civilians suspect vets have PTSD and don’t want to upset them. It’s a heckuva gap.

Our goal is to bridge the gap between combat veterans and the people who love them by challenging this status quo and jump starting our conversations about the war. Here’re some topics to start the process. Whether questions asked by loved ones, or conversations started by vets, this silence between us is in our power to break.

What was your best mission? How often did you go on missions? How long were you outside the wire when you went?

In our modern day, talking about war has not been a normal part of conversations between civilian and veteran. That norm is part of what’s making things hard on all of us right now. We’ll have an easier time understanding the worst days of war only after good conversations about the best days of war. Some of us are ready for these conversations.

It’s not just about talking about bad days and hard feelings. It’s about bridging the gap created by the war. Let’s end the silence between us.